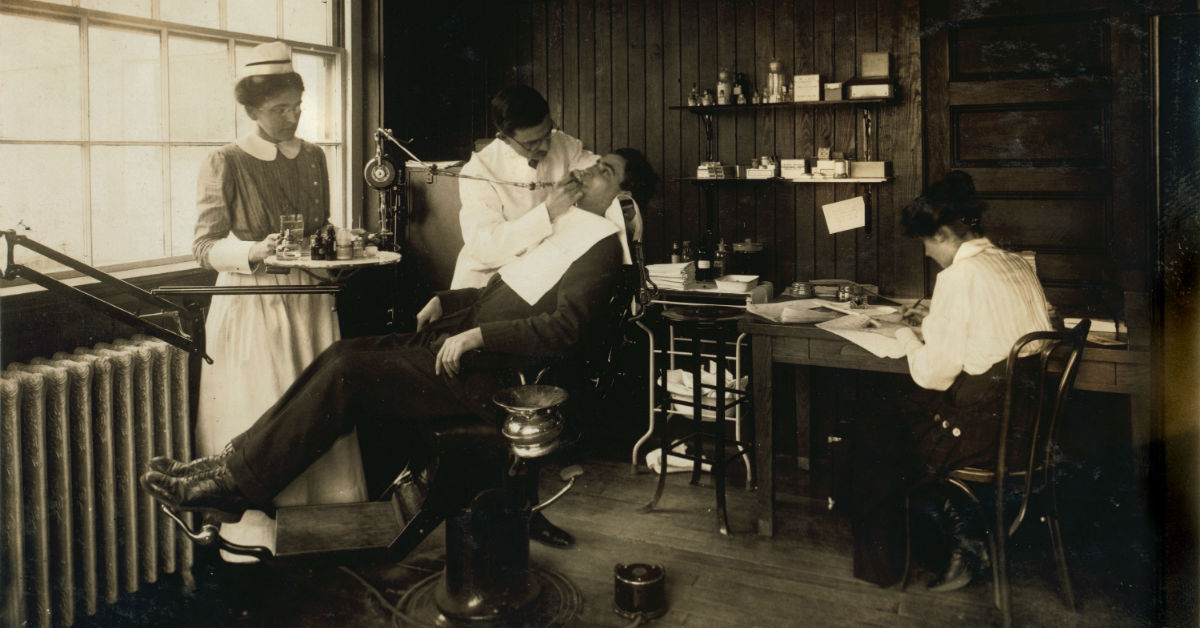 Our teeth are one of the first things that other people notice about us. When we smile, talk, or laugh, others immediately notice the status of our teeth. Luckily we have orthodontists, dentists, and prosthodontists to keep our teeth looking their best. But have you ever thought about what people did before we had these professions? You’ll be amazed by some of the methods used by ancient people to keep their teeth in working order.

Whose Tooth Is In My Mouth?

Nowadays when you need to go in for a dental implant you meet with either your dentist or prosthodontist and a ton of work has to be done to insure that your implant will fit you perfectly. You will need an X-Ray, impressions taken of your bite, healthy gums, adequate bone strength and density, and sometimes even a CT scan before you can receive your implant.

There are three different types of implants that you can receive,

As absurd as it sounds to have someone else’s tooth in your mouth, back in the 1500s, Europeans didn’t have the technology necessary to provide them with a perfect fitting alloplastic implant. They resorted to an unthinkable level and either stole teeth from the dead or they would get them from the poor and then transplant them into someone else’s mouth. The Open Dentistry Journal shows that around this time period, people calling themselves the “resurrectionists” would rob graves in search of teeth for implants. Now the thought of sitting in a dentist chair for hours getting your implant doesn’t sound so bad, does it?

Though he wasn’t the first to try transplanting teeth, a Scottish surgeon named Dr. John Hunter did make some worthwhile discoveries regarding implants. He found that his transplants were most successful when the size of the donor tooth was comparable to the tooth it was taking the place of and when the transplant tooth was recently removed from it’s host. Remarkably, one of Hunter’s patients reported that he retained his implant for about six years, an impressive accomplishment for that era.

If the thought of having a stranger’s tooth in your mouth is unsettling, what about having seashells for teeth instead? In Honduras in 1931, Archaeologists Dorthy and Wilson Popenoe found Mayan remains. Of these remains was the bottom mandible of a woman who had her three incisors replaced by seashell. With the help of radiographs they were later able to discover that there was a worthwhile amount of bone growth surrounding two of these implants. This likely indicates that these seashell implants experienced a level of osseointegration. Osseointegration is the process by which an implant is accepted by the jaw bone and as a result begins to attach itself to the implant. This means that these seashell implants were partially functional.

Most people have heard the rumor that George Washington wore wooden dentures, this is actually a myth. George Washington struggled with dental problems his entire adult life. In his journals he often complains of toothaches, lost teeth, inflamed gums, and ill-fitting dentures. These afflictions were credited to genetics, poor oral hygiene, and the lack of dentistry in the 18th century. Throughout his life he had several sets of dentures made up of everything from human teeth, hippopotamus ivory, brass screws, gold wiring, and bone. When Washington took office on April 30, 1789 he only had one tooth, a premolar that was extracted by Dr. John Greenwood in 1796, who kept the tooth as a memento. However, being toothless wasn’t very presidential so Washington had Greenwood construct a set of dentures for him made of ivory. Keeping these dentures looking clean and white was a struggle and is probably where the rumor of him wearing wooden dentures originated from. Washington would often ship his dentures to Dr. Greenwood to clean for him.

Bamboo: Not Just For Pandas

In ancient China around 4000 years ago, early dentists tried using bamboo as a substitute for teeth. This was a logical choice of material as it was easily obtainable, could be carved and shaped with little effort and because of it’s extreme durability. These early “dentists” would simply carve the bamboo into the size and shape that they wanted, and then proceeded to tape it into the mandible.

A Perfect Smile in the Afterlife

It is common knowledge that Egyptians were obsessed with the afterlife. The average Egyptian only lived to about 40 years old, so they took a lot of care and precision to planning their afterlife. When they died they wanted to be buried with everything that they would need in the afterlife. In Tutankhamun’s tomb along with furniture, jewelry, clothes, food, beer, and makeup was a folding camping bed that he would be able to take out into the desert. They were nothing if not prepared.

It makes sense that with all of their meticulous preparations that they would make sure their teeth were in the best condition possible for the afterlife, and of course for the Egyptians, this meant gold. In around 2500 B.C. ancient Egyptians used gold wiring to stabilize the bones and animal teeth that they would use to replace the teeth that were lost. The Open Dentistry Journal explains that bones from oxen were used by the Egyptians as dental implants.

Archaeologists have also found mummified remains of what is believed to have been an attempt at closing in the gaps between teeth. According to the American Association of Orthodontics, these ancient Egyptians used animal intestines as a cord and wrapped it along the teeth in attempt to straighten the mummy’s smile, similar to how modern day orthodontists use dental wire to align teeth today.

From seashells, to human remains, and animal intestine, it’s safe to say that we’re all very grateful for the advances in dentistry.